Skip to content
The Pitch is Ours is reader-supported. When you buy through links on our site, we may earn an affiliate commission. Read more 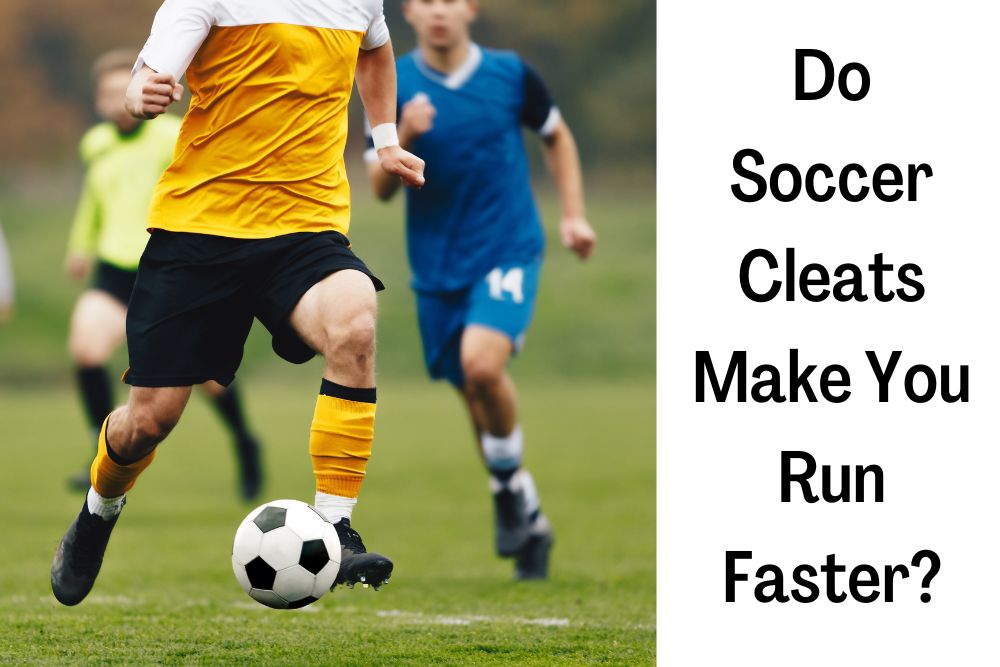 The soccer cleats market has long been scrutinized for the effects of its products on a player’s speed. And a big part of this interrogation goes to the aggressive marketing of these “speedy” shoes!

So, it doesn’t come as a surprise that the Nike Mercurial Superfly II sales took off when Theo Walcot made his record-breaking run in 2014.

Besides the sales breakthrough that year, a controversy that will puzzle the coming generations was born. The lasting controversy of whether soccer cleats make you run faster or not!

Though the dilemma is still new to soccer, it already has its roots deep within the American Football arena. And luckily, that gives us baseline research to create our hypothesis.

But before we jump into clarifying how much faster soccer cleats make you run, if they do so at all in the first place, we need to establish a benchmark fact for talent.

And that’s no pair of shoes miraculously gives you more propelling power. They can help you find stable footing, better friction, and improved placement, but they can’t give you talent and power!

With that said, let’s unwind about how soccer cleats make you run faster.

Multiple factors impact your sprinting performance. But most of them can be narrowed down to your physique, balance, footing, and environment.

Your body-weight ratio, height, muscle mass, and cardio are factors highlighting your physique. If you’ve got 20 pounds over the guy on the defending team, you won’t outrun him!

Your physique also pours over to your stamina, cardio, and lower-body strength. All of which are essential for sprinting performance.

But since the physique has little to gain from the type of shoes you wear, we’ll leave it out from our article here today.

Instead, we’ll focus our attention on the remaining two factors closely impacted by soccer cleats. One by one, we’ll see how the physical environment and balance call out for cleats in soccer!

Suitable For The Pitch

Soccer cleats are designed explicitly for soft-ground arenas. And that’s where they hold the biggest advantage.

Since most soccer fields are natural grass pitches, they’re frequently watered and are usually wet. And I doubt there’s a need for elaboration of how wet surfaces get slippery and are hard to run on. 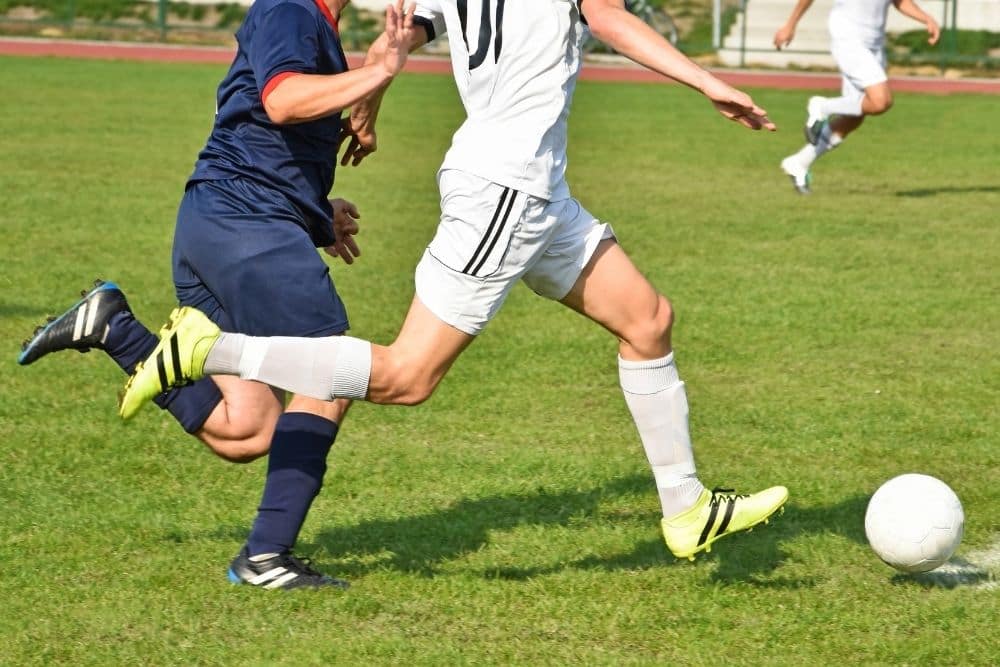 The answer shoes manufacturers have for this lack of friction is spiked shoes or soccer cleats. Cleats have spikes growing to 1/5” inch on the shoe’s sole.

They help dig deep into soft grounds and provide the friction you need to propel yourself for your next step. To observe the difference for yourself here’s a slightly non-scientific way to test it out for yourself!

Try running uphill on dewy grass in the morning with your regular trainers on. And then do the same with your soccer cleats on.

You’ll see that though the soccer cleats are sturdier and heavier, it’s easier and faster to run in those. That’s because they give you more friction in the environment you’re using them in.

Running in soccer is rarely a straight-line sprint as in the Olympics. You twist, turn, come to a dead stop, and launch from zero to a sprint quite often. And for that, you need an excellent balance!

As you’ll notice, keeping your balance becomes vital when carrying out such movements. But if your cleats dig in deep into the ground and prevent slipping, you find a stable balance. 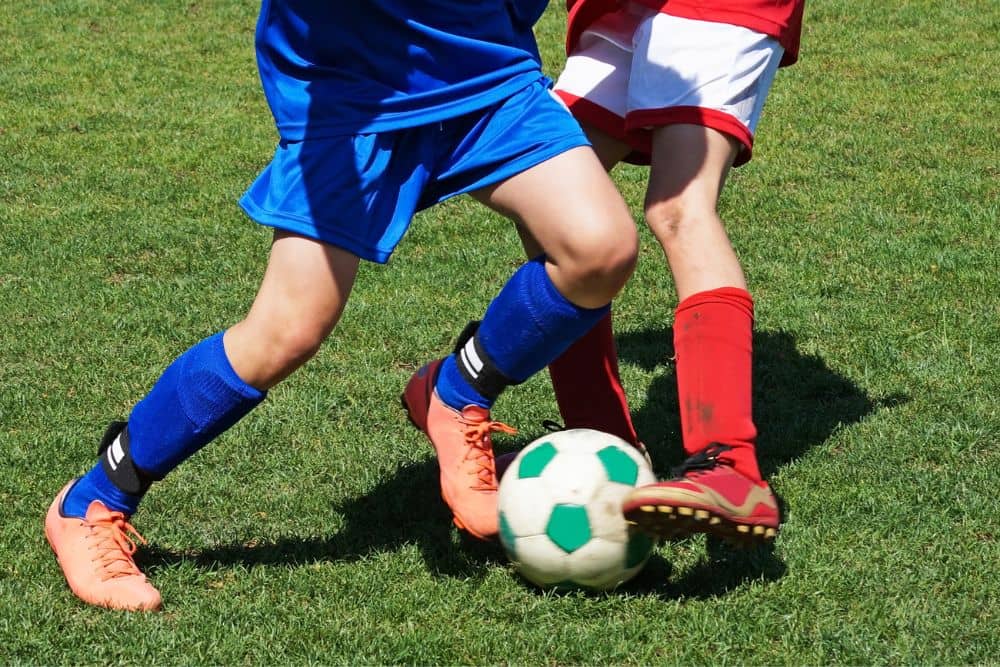 If you’re able to sprint at high speed, keep the ball at your feet, twist, and turn effectively with balance, you naturally become faster than the players you’re competing with.

Trainers hold the biggest advantage on hard surfaces, like indoor soccer, for faster running because of the lightweight and comfortable design.

But when you wear the same trainers on a soft surface soccer pitch, they don’t stand a chance against the heavier and sturdier cleats.

Though soccer cleats are heavier than running shoes, they provide the perfect friction for launching power running movements.

The trainers or soft ground shoes may even hold a weight advantage when running in a straight line. But as the game becomes more complicated and you’ve got to make sudden shifts, you’re likely to slip and lose your balance.

In a way, soccer cleats make you run a few strides faster and allow you to make quick movements.

Technology has slowly and gradually crept into the deepest corners of the sporting world.

From accurate stats and distance covered on the field to the goal-line tech and soccer cleats, you’ll find it everywhere in soccer!

Soccer cleat manufacturers are investing a ridiculous amount of time in bringing out the best product in terms of design, utility, function, and speed.

Ever wondered why so many new soccer shoes are featured every new season?

The most prominent effect of technology in soccer cleats is visible in the material used for the spikes on these shoes.

Initially, all soccer cleats featured metal spikes. Other than being dangerous to other players, metal spikes are also heavy. And anything heavier slows you down on the pitch!

The answer to this weight reduction came in the shape of plastic studs on soccer cleats. These spikes are the same length with more or less the same rigidity, but much lighter.

And these lighter plastic cleats make you run way faster than metal cleats. With less weight around your ankles, you’re more fluent in your movements and actions.

Similarly, the compactness of cleats and molding perfectly around a player’s foot are other areas of technology that improve a soccer player’s performance and speed.

How Much Faster Do Cleats Make You Run?

I’ll highlight my original point of talent here again. There are very specific conditions in which soccer cleats make you run faster.

And the general direction of those conditions is playing on a soft surface like grass. Because that’s the only type of surface that cleats apply to and provide you with an advantage.

If you’re playing on a grassy field with flat-soled firm ground shoes or trainers, making a switch to soccer cleats will improve your sprint speed.

You’ll have a much quicker accelerating and decelerating potential with a strong balance in high-speed movements. To put it roughly, you’re likely to get about 2-3 steps ahead of players who ran at the same speed as you before. 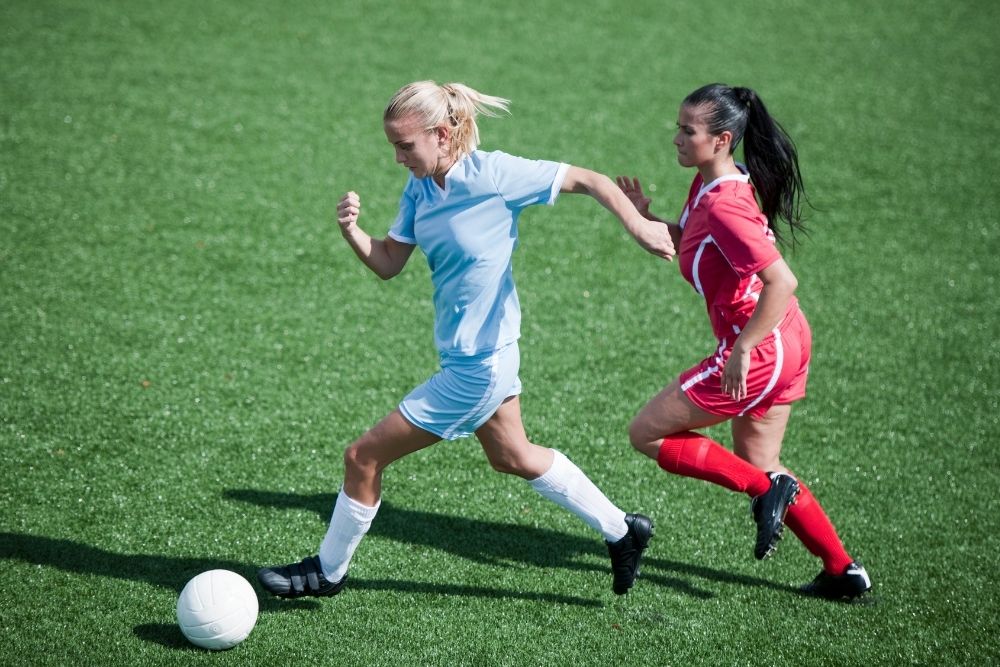 But again, that is only if you were slipping excessively in your previous shoes and strongly needed friction.

If your limiting factor is your physique and not the shoes, making a switch to cleats will barely make a noticeable difference in your speed.

Since we’re talking about speed and soccer shoes, let’s compare soccer cleats to other types of soccer shoes to get a clear picture of why cleats may be faster than all.

The other forms of soccer, indoor and turf, have their own specific shoes. You wear a flat-soled shoe for indoor soccer games with patterns spread across the shoe’s soft rubber sole.

And for turf, you get shoes with rather modest spikes. However, they can barely be called spikes as they are mostly soft rubber or plastic spikes not more than ¼” inch long!

While the turf and indoor soccer shoes boast superior ball control when compared to cleats, they are much slower on a soft ground pitch.

Some casual soccer players might even wear indoor or turf shoes to a grassy soccer field claiming they’re faster than cleats. But that is an illusion created by the light weight of these shoes.

In reality, soccer cleats are the speediest shoes on a grassy field and will mostly keep you a couple of steps ahead of the players wearing other types of shoes. 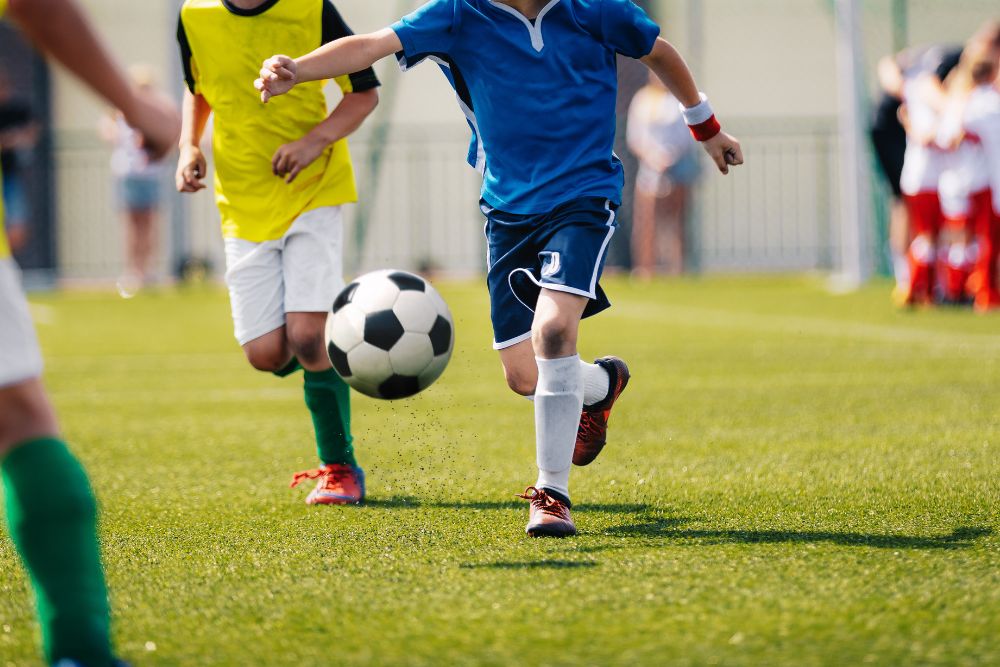 Though other shoes may be lighter and more compact, soccer cleats provide the most solid friction. And friction is the most crucial component for running fast!

In certain cases, yes, soccer cleats do enable you to run faster. But it’s more like they provide you with more friction and a better balance to improve your sprint speed.

If you lack the stamina or muscular power to propel yourself harder and faster off the ground, expecting soccer cleats to make a noticeable difference is expecting too much.

However, as an estimate, you’re likely to improve your 100 meters sprint by half a second or so in the best cases. And while that may be a decent lead in the Olympics, it isn’t a very prominent difference on the soccer field where there is so much more happening.